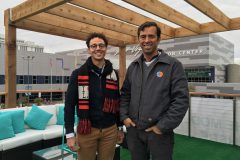 Chris Krager, AIA/KRDB, the architect for the home, and Noah Ornstein, co-founder and CEO of Ark.la, on the rooftop entertainment space of the Modern House at IBS 2017.

Each year, manufactured and modular housing industry members who have demonstrated extraordinary leadership in the areas of product design, customer… [read more]

With much destruction already laid waste in its path,  Hurricane Irma’s storm center made landfall on Cudjoe Key in the… [read more]

During the first week in May, Palm Harbor Homes will return to the exciting Puyallup RV and Home Show just… [read more]

From www.buildwithpropane.com Nationwide Custom Homes has been building modular homes in Martinsville, Virginia, for over 55 years. Like Palm Harbor… [read more]